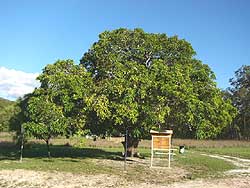 This is the town with a windmill in the middle of the road.
The area was first known as Western then Tinaroo before settling for the name of Watsonville. Tin was discovered in this area in 1880 by Bob Watson and party. The town grew and became the cultural centre for the area with seven hotels, five general stores, butchers shops, bakers, blacksmiths, post office, doctor, police station and Chinese market gardens.
There was also a tennis court, golf course, football ground, rifle range, cricket pitch, school of arts library and two batteries for crushing tin stone.
A school operated from 1882 until it closed in 1943. Sport was big in Watsonville and it had its share of top athletics, champion tennis players and its rifle club was one of the best in the north.

Today this area is noted for two special events. The first is the ANZAC day celebrations held near what has become known as the ANZAC tree which was planted in 1917. The combined service is for Watsonville, Stannary Hills and Irvinebank and all the small mining camps that were in the area. The second event is the Pioneer Women’s day, which is a celebration of the achievements of the pioneering women of the Watsonville/Irvinebank district. The day is held on the first Sunday of June.

The rich tin mines in this area have been worked since 1881. The first tin battery was moved into the area around 1891.
There were about 150 people here in 1906, but by 1910 the population had dropped to around 45. The Bakerville hotel which was originally known as the Three mile hotel, then the Federal Hotel, was built in the early 1900’s.
Mrs Stella Pedersen was the licensee of the hotel from 1920 until she closed the hotel and surrendered her licence in 1960. The old hotel was known from Herberton to Irvinebank and beyond for its famous meals. There is a story that the old Beacon Light stove that was in the hotel had never been cold in the forty years of Mrs Pedersen as licensee. The old hotel has since been moved into Herberton and is now the ‘Tea Rooms’ at the Herberton Historic Village. 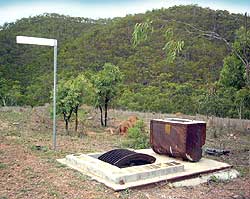 Monument to the Pioneers of Stannary Hills 2003

The tin mines were found in this area in 1884 by Willie Joss. The town was originally known as Eureka named after the creek on which it was situated.
The town had five hotels, several general stores, baker, butcher, fruiterer, cordial factory, tobacconist, hospital, post office, police station and school.
Sports was also strong in Stannary Hills with a tennis club and cricket and football teams playing the surrounding towns. The first battery was erected around 1888 with a larger battery being erected at Rocky Bluff on the Walsh river in 1902-3.
The Stannary Hills Tramway and mining company opened their 2 foot gauge tramway in May 1902. This line ran from Stannary Hills up Eureka creek to Boonmoo on the Cairns-Mareeba- Chillagoe line. A spur line was opened to their new battery at Rocky Bluff in November 1902.
At its peak the population was around 800 people and by 1955 the last hotel had closed and the town was deserted.